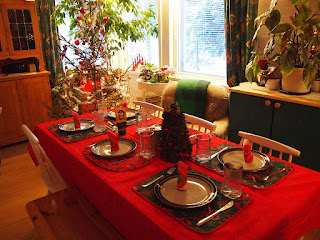 Today is Anna's Day in Finland and Sweden, notable because it's the traditional day to start preparing the lutefisk (cod preserved in lye) that makes up one of the components of many traditional Scandinavian Christmas meals.

We're resorting to a rather fish lead-in here, but speaking of starts....

Using the first letters of their lines of poetry, poets used to (and can still) spell out significant words or names.

Acrostics as they're called, are great fun; can we flash fiction writers get in on some of the fun with a bit of a variation?

To complete today's prompt, come up with an intriguing title, made up of at least 9 words or more.

Write a flash that goes with the title, starting each sentence of the flash with one of the words from the title, in the order in which the words appear in the title (and extra points if you can spot what the seven-word title to this post should be!).

Flash examples of with long titles includes some of these gems (listed in order of title length), published in the 2018 Flash Flood:


In 2012, 2014 and 2015, National Flash Fiction Day ran a virtual Write-In for writers who couldn't make it to a flash fiction event around the country. We are considering reviving this project in future, and would love to hear about whether or not you would be interested in this project as a writer or as a volunteer. We'd be grateful if you could let us know via this super short survey.  Feel free to share the link with any writers you know.  Thank you for your time!

Find out more about National Flash Fiction Day at our website or get in touch if you'd like to learn more about how you can get involved.

This piece is part of our 2022 Community Flash Series showcasing new writing by the Wandsworth Carers Centre Writers Group. You can read m...