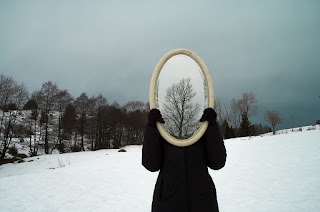 
Many people see the end of the year as a time for personal reflection.  We look back on the year, and make plans for the next.  Forget the resolutions and forward thinking for now, though; today we're going to focus on ourselves....

Step one
Take a piece of paper and draw a line down the middle.  Spend a minute or two jotting down a list of adjectives or short phrases that you might use to describe yourself.  Write this list on the left side of the paper.  Sometimes staring into an actual mirror can be a great way to get the words flowing.

Step three
Write a flash about a main character who is the exact opposite of how you've described yourself, a character inspired by the words and phrases on the right side of the paper.  Try to get inside this character's head as much as possible.

For an extra challenge, write a scene in which you and this main character would act in exactly the same way or come to the exact same decision about something, but for entirely different reasons.


One of the most important things you can do to support National Flash Fiction Day is to support yourself and your writing life.  After all, what would NFFD be without writers and their stories?

It's only the third of December, but why not have a think now about one thing you can do to keep up, jump-start, or generally improve your writing practice in 2019...and then put a plan in place to make that happen!

Find out more about National Flash Fiction Day at our website or get in touch if you'd like to learn more about how you can get involved.

Congratulations to our 2021 award nominees!

Before we launch into a new year at FlashFlood, we'd like to take a moment to celebrate all our 2021 award nominees. Congratulations to ...